“Blending affecting memoir that touches on such matters as mental illness, alienation, exile, and a transcendent maternal love with brittle condemnation of a condition of unfreedom and relentless othering, the author delivers a difficult but necessary argument…An essential contribution to any discussion of race and likely to be a standard text in cultural studies for years to come.”

“Wilderson’s ambitious book offers its readers two great gifts. First, it strives mightily to make its pessimistic vision plausible. Anyone unconvinced by the vision may find this a dubious contribution, but enough people have been convinced by the view to make an accessible introduction to it a valuable resource just for understanding contemporary intellectual life. Second, the book depicts a remarkable life, lived with daring and sincerity.”

“I am awed by this beautiful and compelling book Afropessimism and its ability to combine a growing up (Black) memoir with Frank Wilderson’s own unerring and poetic interpretation of critical race theory to inexorably install in all the ways that only great story telling can the pithy truth that without Anti Blackness there would be no America. Can you handle that. Can I?” 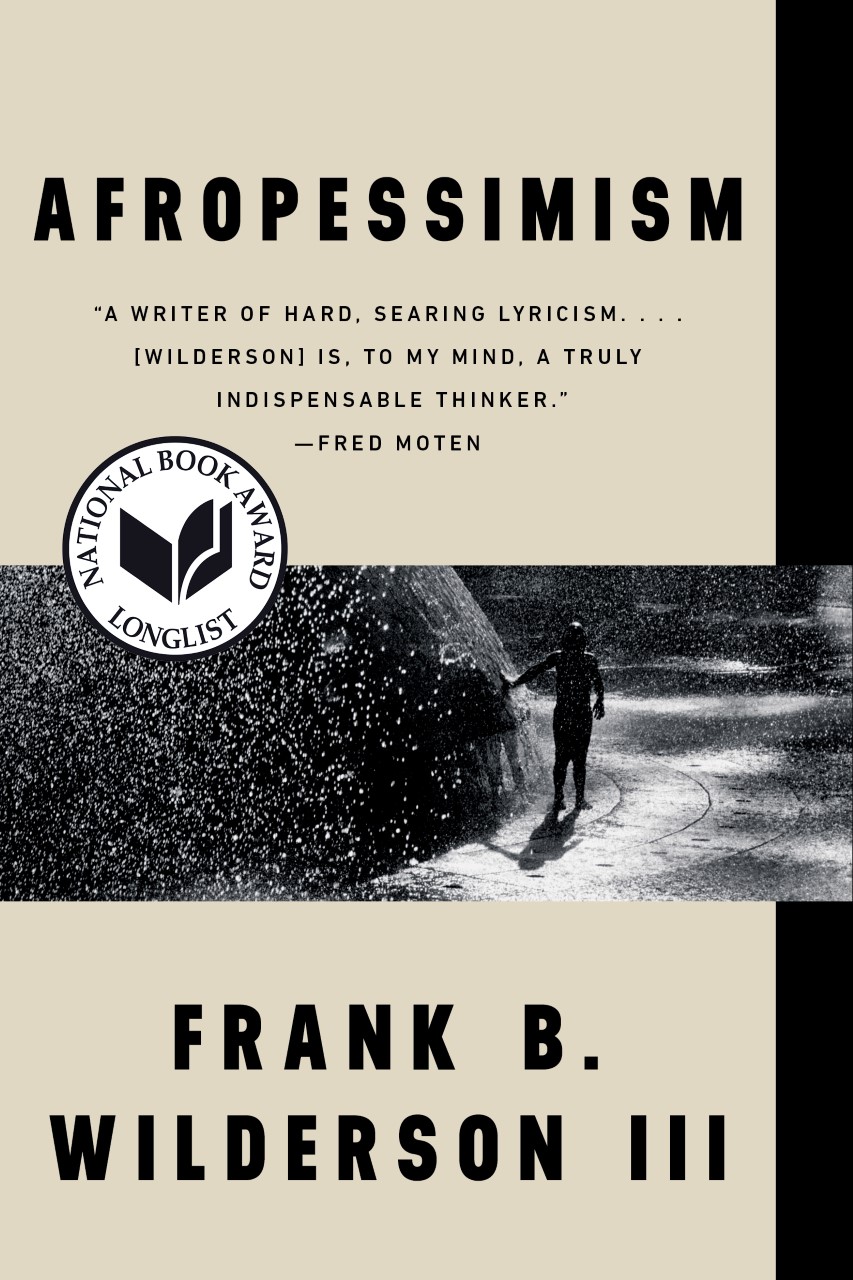 Why does a perpetual cycle of slavery—in all its political, intellectual, and cultural forms—continue to define the Black experience? And why is anti-Black violence such a predominant feature not only in the United States but around the world?

Combining trenchant philosophy with lyrical memoir, Wilderson presents the tenets of an increasingly prominent intellectual movement (Afropessimism) that sees Blackness through the lens of perpetual slavery. Drawing on works of philosophy, literature, film, and critical theory, he shows that the social construct of slavery, as seen through pervasive anti-Black subjugation and violence, is hardly a relic of the past but the very engine that powers our civilization, and that without this master-slave dynamic, the calculus bolstering world civilization would collapse.

“Frank Wilderson slings piercing stories and scalding analyses with literary fire and intellectual rigor. His tales juke genre and high-step over high-theory mumbo jumbo, and float Franz Fanon some new wings. Like Ralph Ellison’s bluesman, he peers unflinching into the abyss, testifies to its brutal histories and hopeless predicaments, ‘to finger its jagged grain, and to transcend it, not through the consolation of philosophy but by squeezing from it a near-tragic, near-comic lyricism.’ He ghostwrites our brutal pasts into present and still hopeless predicaments, yet divines deep love and blues humor. We cannot dismiss Afropessimism’s unnerving and undeniable truths, nor the timeless art of its author.”

- Timothy B. Tyson, author of The Blood of Emmett Till

“Frank Wilderson’s Afropessimism is a brilliant memoir and riveting work of creative non-fiction. He joins the ranks of Claudia Rankine, Saidiya Hartman and Frantz Fanon as one of the boldest and most unflinching theorists of the indispensability―like oxygen to lungs―of anti-Black violence and racism. And nothing since Ursula K. Le Guin’s The Ones Who Walked Away from Omelas has haunted me with the sheer terror of truth that Humanity and the world itself are defined by and feed on Black suffering and death. The greatest challenge in reading this Afropessimist coming-of-age story is seeing a reflection of yourself and finding the will and the words to prove him wrong.”

- Khalil Muhammad, author of The Condemnation of Blackness: Race, Crime and the Making of Modern Urban America